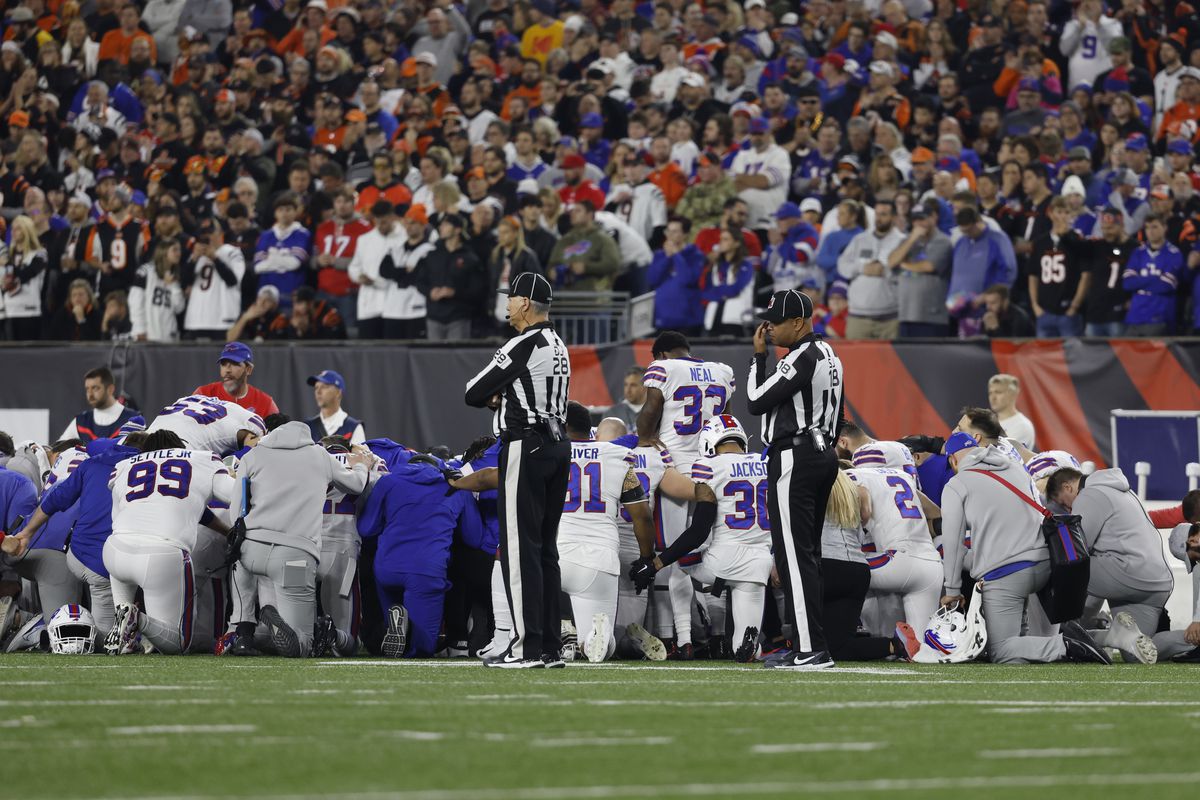 Buffalo Bills players and coaching staff huddle and pray as Damar Hamlin is being attended to. Photo by Kirk Irwin/Getty Images

Defensive back Damar Hamlin of the Buffalo Bills remains in critical condition tonight at the University of Cincinnati Medical Center (UCMC).

With 5:53 left in the first quarter of the long awaited matchup between the Bills and the Bengals, Damar Hamlin initiated a tackle on Bengals wide receiver Tee Higgins. Shortly after the high speed hit, Hamlin rose from the ground and instantly tumbled backwards and hit the turf lifeless.

Here’s what we know so far:

At 8:55 PM EST, the hit and injury occurred. After being down for ten minutes, and administration of CPR and the use of an automated external defibrillator, at 9:18 PM the game was officially suspended.

At that point in time, Hamlin was still on the field and at 9:25 PM, the ambulance left the stadium. Both teams returned to their locker rooms and were supposed to take 5 minutes to regroup and talk before coming out and resuming the game.

However, it was decided by both teams amongst themselves and their coaches, to not resume play. At 10:01 PM The NFL officially postponed the game. Another time and date was not provided at this time, as it is not the main concern given the matter at hand.

The University of Cincinnati Medical Center initially scheduled a press release to enlighten everyone on the condition of Hamlin. However, approximately 30 minutes later, the hospital cancelled the press release and stated they would not provide a statement on him for the reminder of the night.

Damar Hamlin, Who is he?

Damar Hamlin is a safety the Buffalo Bills drafted in the sixth round of the 2021 NFL Draft. Hamlin grew up in the Pittsburgh area and attended the University of Pittsburgh, and exceeded expectations.

After proving himself throughout the course of last season and this year’s training camp, Hamlin was elevated to starter after teammate and starting free safety, Micah Hyde, was injured. Damar Hamlin has started 14 games this season and has proven himself to be amongst the best in the secondary throughout the NFL.

At only 24 years old, his career and future shined very bright, and all of us are praying he will be okay. The main concern for his family, his teammates, the NFL, and the entire sports world is that Damar Hamlin is alright.

Damar Hamlin also had a GoFundMe for the charity he started once he entered the NFL. The Chasing M’s Foundation Community Toy Drive fundraiser had an initial goal of $2,500. Entering tonight’s game, the fundraiser had raised just above $10,000. At this point in time, the fundraiser has raised $2 million, with thousands of donations coming in by the minute.

Reactions Around the Sports World

The game of football is not just a game, it is a community, it is a family, and it’s what brings people together. The NFL should not be prioritizing the rescheduling of this game, as many people have pointed out, it is not what the concern is as of this time. The life of a human being, a son, a teammate, a community leader is more important than a game of football, no matter the significance this late in the season.

Seeing the emotion on the sideline tonight, it shows just how dangerous their line of work is, and how close the connection a player has to their teammates.

The entire sports world has come together to show their support. It can be seen as Hamlin’s charity is gaining approximately $5,000 per minute and is only growing faster. Damar Hamlin is a young man who has shown the sport nothing but respect and hard work, and has shown his community how much he cares for them and the importance of helping people in need.